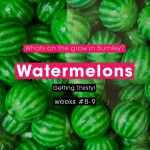 It has been a couple of weeks since our last update, and I’m sure you’re all wondering how our watermelons are growing! The vines are now completely spreading throughout the grow room, taking full advantage of the support offered by the netting.

With all this growth, the team at Burnley have discovered just how thirsty watermelon plants get (we suppose it makes sense with the fruits being made up of around 92% water!) and the 25L tank has been upgraded to a 50L flex tank. They are just non-stop drinking, but are still only being fed with water and Moonshine Nutrient Enhancer thanks to the BioTabs in the All-Mix soil.

Around a dozen flowers have been hand pollinated now, but with only three watermelons growing it’s safe to say that hand pollination doesn’t have a 100% success rate. Sometimes it is the only option though and, without any bees to do the hard work, we think the team have done well to get three fertilised for sure. Don’t forget, there’s a very limited time in which fertilisation can occur. Once the female flower has closed, that chance has passed! There’s still time for more flowers and fruits to appear though – we’ve got our fingers and toes crossed. So yes, we now have three watermelons in total, and they’re all coming on just fine. The very first one to be pollinated is storming ahead on the growth scale, and you can see just how much it has developed in the past two weeks. When we first photographed her against a cola can, it was probably a quarter of the size, but now it’s pretty much the same and in desperate need of support, as even though the stem is looking thick and strong, at this crucial stage we don’t want to chance it breaking.

Unsure of what to use, as we needed something that will not only hold the weight but also stretch as the fruit grows, we had the eureka moment of using a pair of ladies tights. Obviously, we didn't have any to hand, so a quick dash to the corner shop was in order to grab the cheapest pair we could find. So far this DIY approach seems to have done the trick, but we might have to rethink as the fruit piles on the weight as we don’t want to be laddering our tights do we, that would be just embarrassing!

As for the other pollinated fruits, although a couple of weeks behind the biggest, they’re growing as they should be, and hopefully the next update we’ll have more to show, but in the meantime, here’s a few photos from week #9.